A dream that comes true!

I enjoy tennis, so once I moved to London I was anticipating the end of June when the best tournament in the world begins. Early in the year I started looking for tickets, but the prices were quite prohibitive. There is a great demand because it is an event recommend for everyone who is in London during those two weeks, but I wanted to breathe a little ‘air’ of this amazing event, so I decided to try it anyway.

I went to Southfield tube station with the district line (green line) and from there, about 110 yards away, there is the first gate of access for those who must buy the day ticket; the gate is more than two thirds of a mile  from the playing fields,and in a normal day you will find an endless waiting line of people, but with a £ 16 ticket (or £ 12 if I remember correctly) you get a ticket to Wimbledon that excludes the field number 1 and the central court.

Evidently that was our lucky day because there was not waiting line for us (it was the Thursday of the second week and there were no important matches in the main draw), and soon we entered into the temple of Wimbledon. 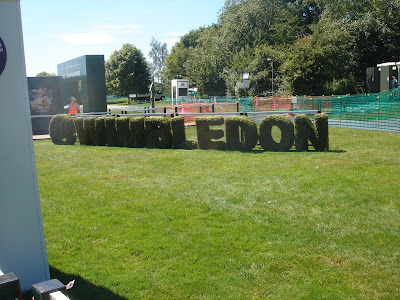 Already feeling the excitement of being able to get in so little time, with so much ease, and above all without having to spent more than my salary, we began to take the first pictures and behind us we saw the board of the games of the day and we discover to our surprise that  Errani / Vinci were playing the semifinals of the women’s doubles. We rush to the field and with great joy we watched the final game of the victory of our girls. You can see them here immortalized leaving the field after winning the match.

We were excited to see the stars, so we returned to read the billboard as we began to understand the organization of the event. As we read the list of the meetings in progress, I discovered there were many top players in turn, Nadal who was returning home, and Murray outgoing champion. The same fate was after reading the names of the Williams sisters, Sharapova, and our Camila Giorgi.
By studying the billboard names rather familiar, we came to understand that there was an ongoing tournament of old glories. How not to go to see Enqvist and Philippoussis??!!

Mark in his show time, capable of still serve at 131mph! Absolutely Amazing! 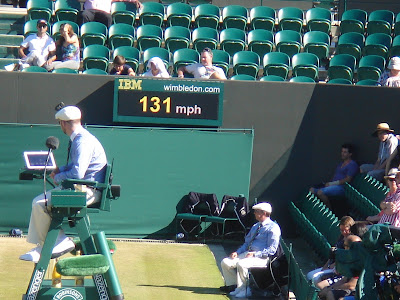 He smiled and laughed with the public; Gimelstob and Wilkinson missed the point to win the game and suddenly there was a scream from the public “Mark! Give me one ace!” He turns around and says ‘Okay, I will put it in the central!’ He shoot a service to 118mph… ace! The crowd is exalted, He turns around and greets! Unique! 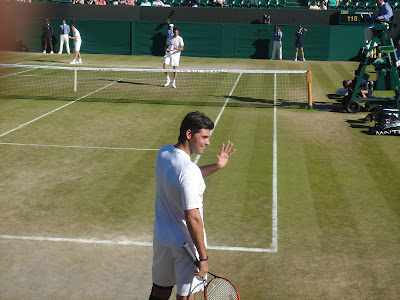 At the exit from the field they had all the attention; signing autographs, taking pictures with their fans, very approachable!

Then we continue to walk in search of some other nice match, and we note an incredible crowd around a small field; What would attract all the people? Words are not required, the crowd was justified, I leave you to these pics…

Goran was in great mood and he loved to entertained the audience. He was laughing, making jokes, made a gag with the ball boy, just to make a show; it is not only a meeting of tennis between old glories, is a show! During a long exchange extended by baseline between his companion and the opponent, he has the time to take a chair from the court and sat down, while the exchange continued, and the crowd laughed and went crazy! after that he made the volley still seated by lengthening the paddle! Hilarious! 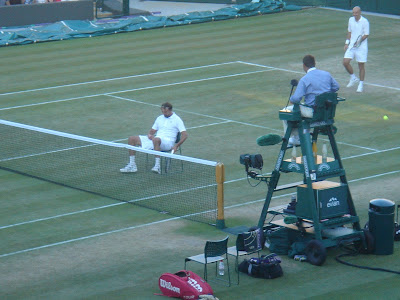 The day was unforgettable! all day we enjoyed the sun that in London it is not seen very often,  it was really a lucky day and a great experience. I highly recommend it to all, lovers and not tennis enthusiasts. Overall, Wimbledon is not only one of the 4 grand slam tournaments, Wimbledon is an experience and for many a religion!